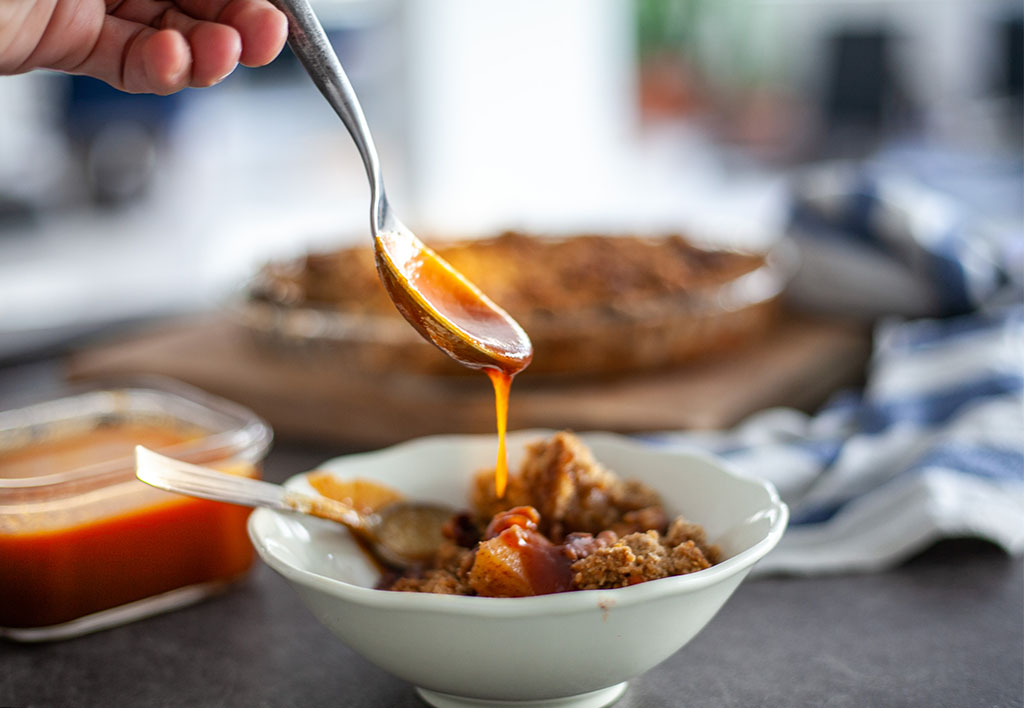 Apple crumble could be added to the list of comfort foods. It is the buttery crumbs, the soft and warm apple, the scent of cinnamon. Together with a traditional apple pie, which worldwide is a dessert that reminds us of home and our parents or grandparents, apple crumble has this same impression. A very easy recipe, perfect for Thanksgiving or Christmas gatherings, or as an afternoon treat with coffee or tea. It is easier and quicker than making a pie and it also quite forgiving with the quantities used. But even for a beginner this recipe is easy and you can do it using just one bowl.

This initial recipe is close to my heart because my friend Christina gave it to me when we were still in school. Her family always invited us for a so-stuffed Thanksgiving feast and Christina always made this apple crumble. When I took over and started cooking for Thanksgiving, she had emailed me the recipe which for years it got lost and I discovered it recently. It has been adapted a bit and altered throughout the years but it always reminds me of these gatherings full of food.

If you want to make it more Christmas-y you can add more spices like cardamon, all-spice, nutmeg and cloves. It is served perfectly with salted caramel sauce which balances the sweetness which recipe I will share soon, still needs to be photographed properly!

juice from half a lemon

a shot of cognac (optional)

A pinch of salt

Peel and core the apples and cut into 1cm cubes. Put them in a large bowl and add the 2 tablespoons of brown sugar, a tablespoon of cinnamon and the lemon juice. Mix altogether and put them in a saucepan with the shot of cognac and cook for 5-7 minutes till the juices evaporate and the apples soften slightly. Butter a 24 cm ovenproof dish or glass pyrex and spoon the apple mixture into the bottom.

Place the flour, oats, cinnamon, salt and sugar in a large bowl and mix well. Taking the cubes of butter rub into the flour mixture by hand. Keep rubbing until the mixture resembles breadcrumbs and can be held together when pressed together.

Spread evenly the crumble on top of the apples by pressing the crumbs by hand creating larger pieces of dough.

Sprinkle 1 tablespoon of brow sugar on top of the crumble, and spread walnuts or pecans if desired.

Put the dish in the preheated oven and bake for 40-45 minutes until the crumble is golden and the fruit mixture bubbling.

Let it cool for 10 minutes and serve with ice cream, custard or salted caramel. 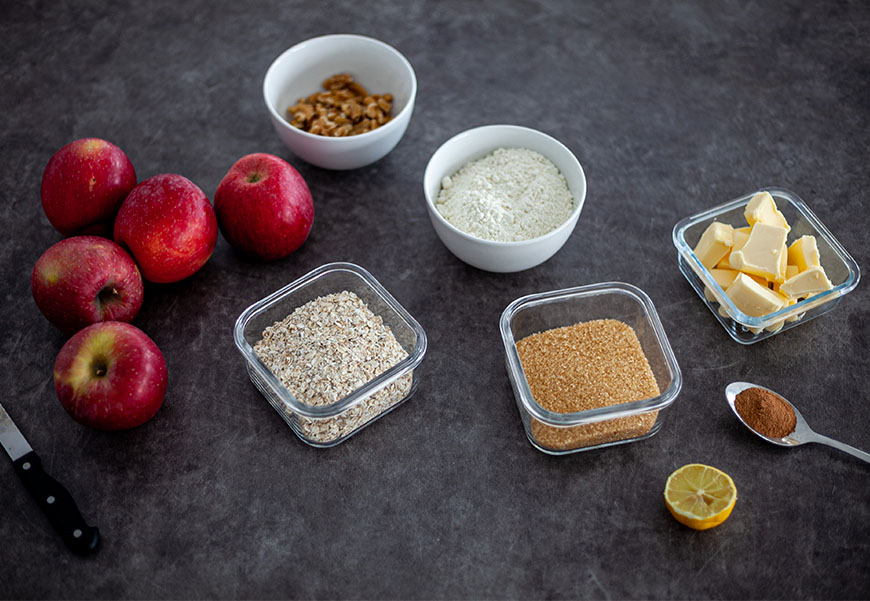 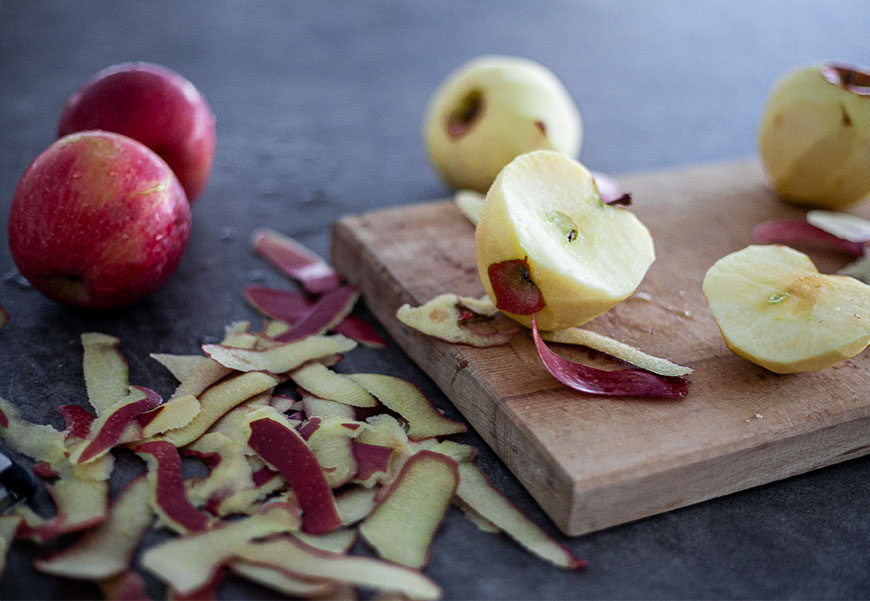 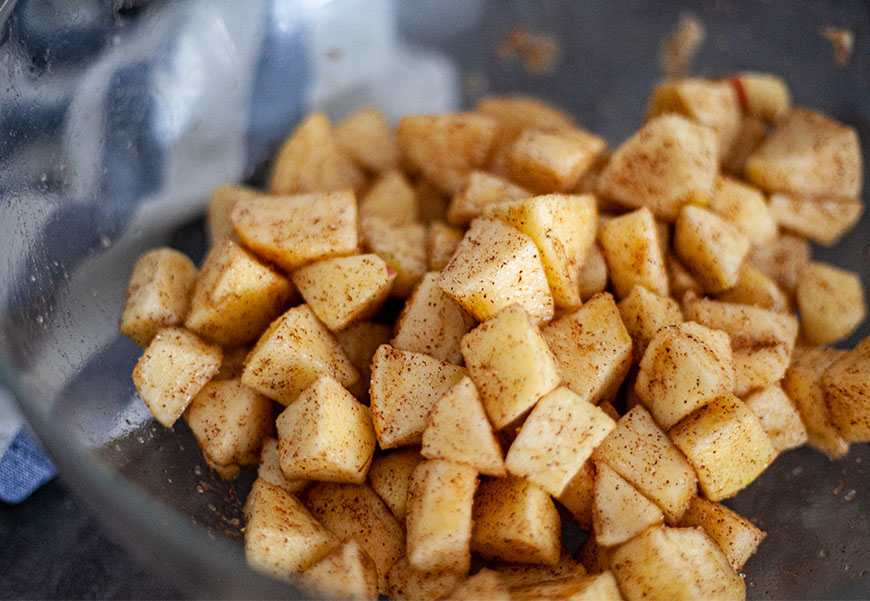 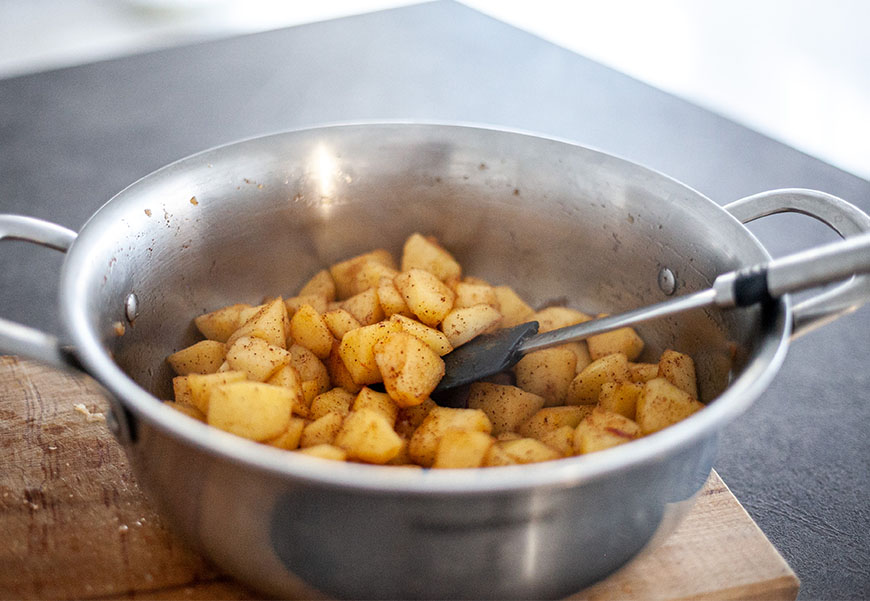 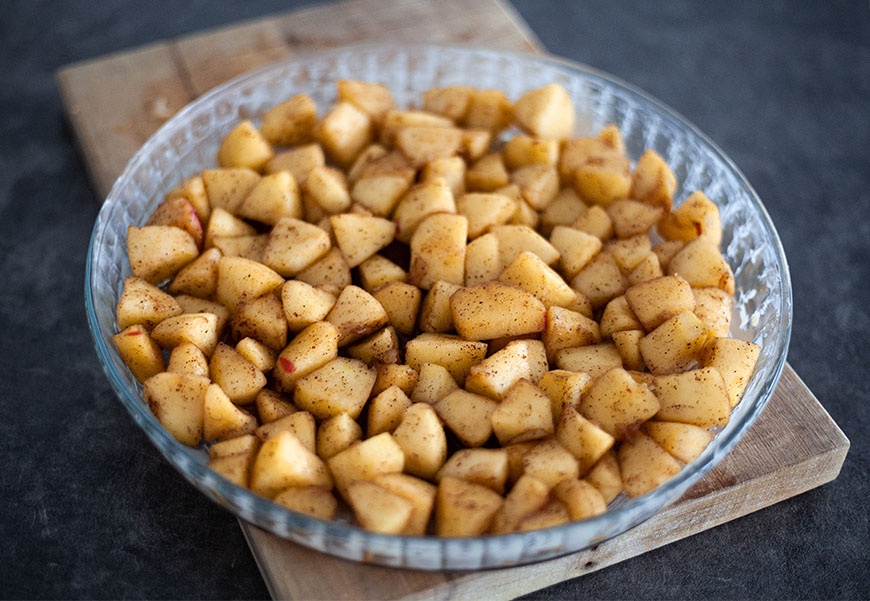 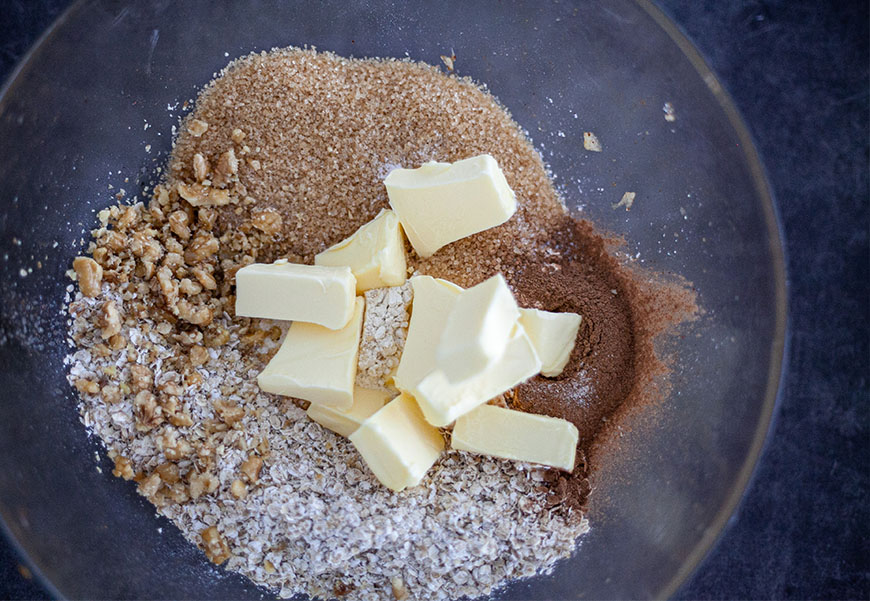 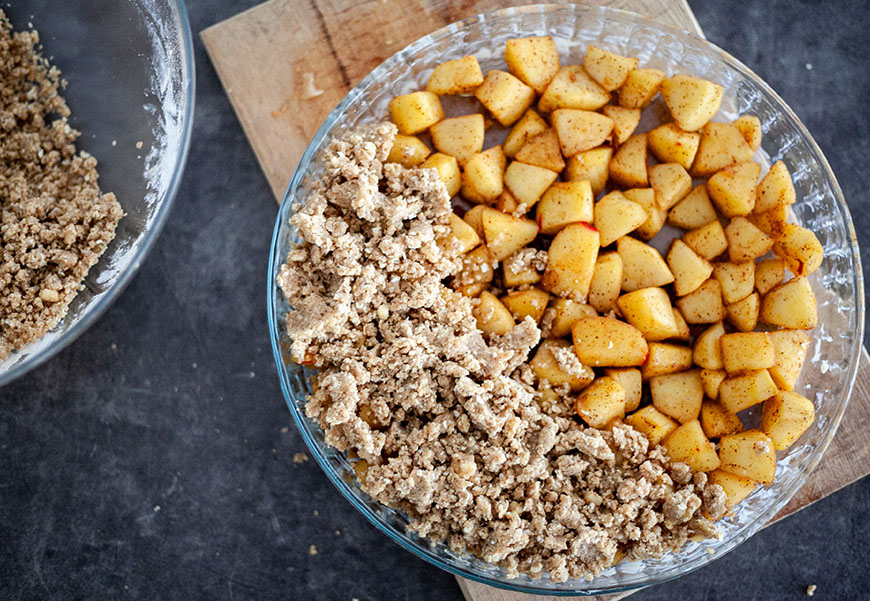 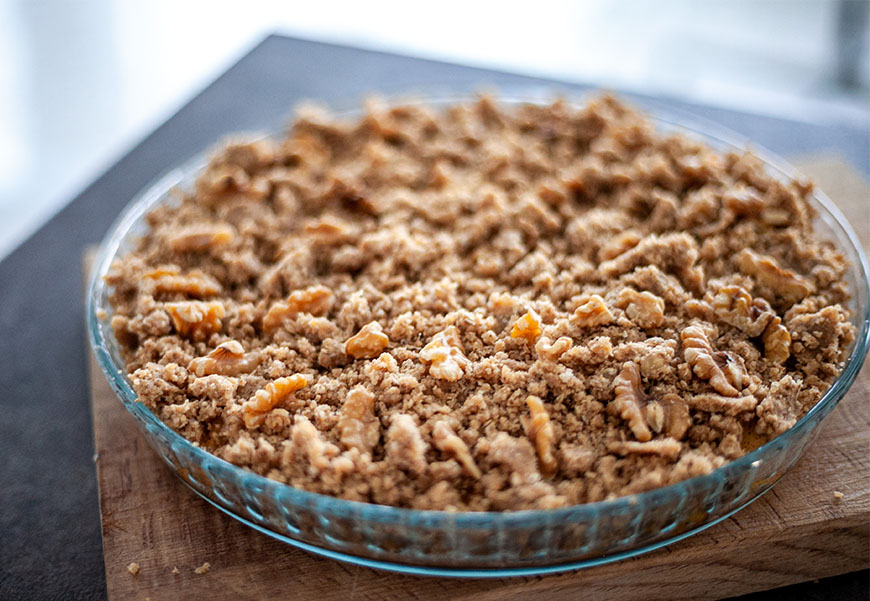 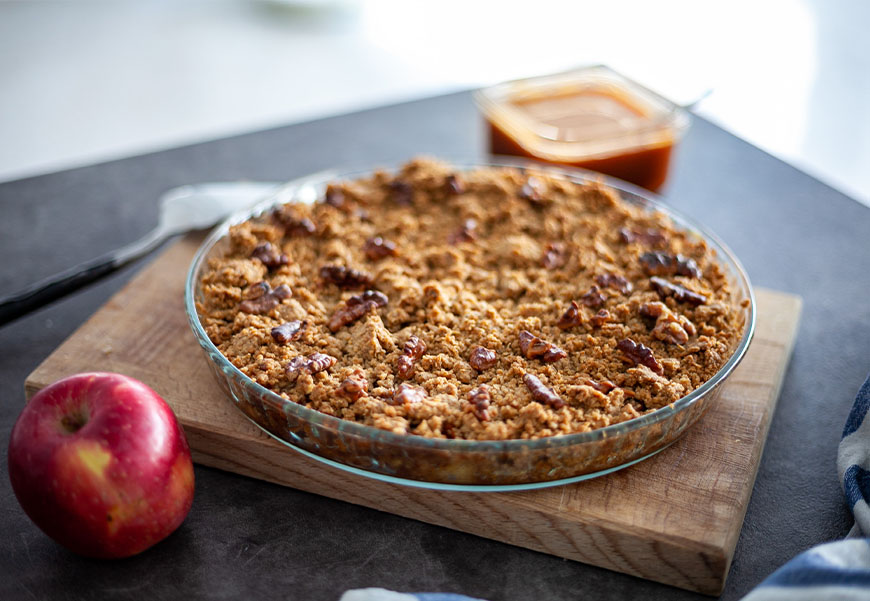 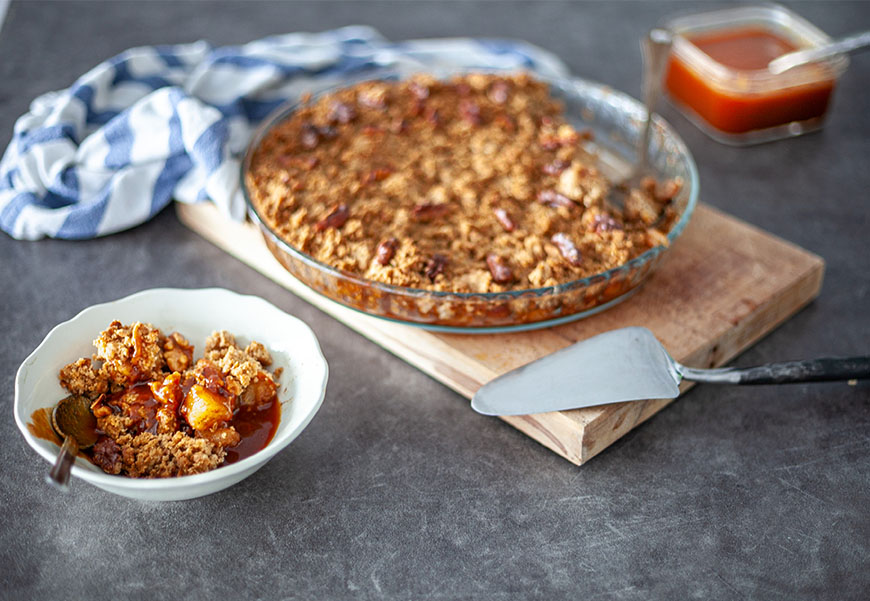