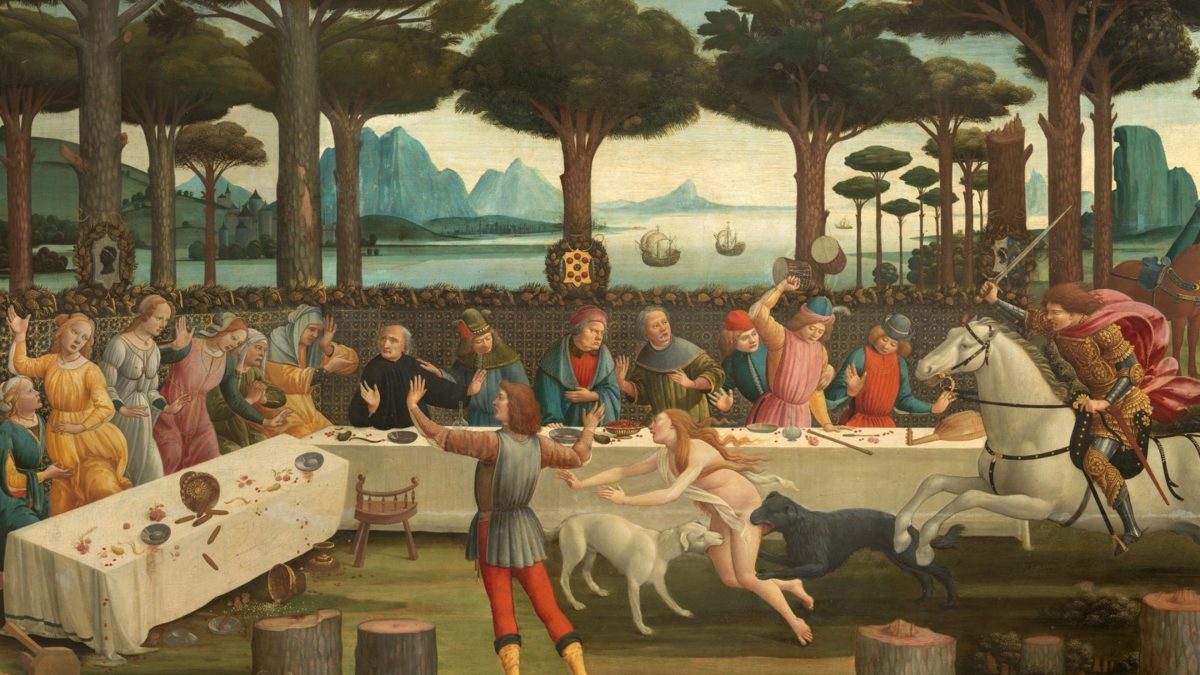 A month ago, I was in Madrid and spent an afternoon at the Prado museum all by myself. I love going to exhibitions alone, cause I can observe and spend as much time as I want in front of every piece of art, wander around in circles and create my own journey through the space without having to communicate and coordinate with someone else. Many times, I write my thoughts or just walk up and down the exhibition space just observing the lighting of the room or the architecture of the space. The Museo del Prado holds approximately 20.000 pieces of art dating from the 12th century till the early 20th century.

It is the second time I visit the museum. It was one of these museums that you need hours and hours to walk around the corridors, get lost, and all this information gets so overwhelming. I find myself often being so full of the imagery that my brain cannot absorb any more information. It was one of these days, late in the afternoon. I didn’t want to leave the museum but still I could not really pay attention to the historical references and get inspired. Till I found myself in this one room that was a dead-end and I had to go back. I turn around and observe the room. It had at least 40-45 paintings, all still-lifes depicting food and kitchenware. The compositions and light and the way the painter conveyed texture and volume is remarkable. I go close to a painting and look for the name of the painter. Luis Egidio Melendez. I write it to my notes to remember to research about him. Later I found out his was one of the greatest Spanish still life painters of the 18th century. It is so eye-catching how he has used all these mundane kitchen stuff and food, combined in such stylized way, tight but still having depth. What was common in all his paintings was that the subject that he drew was closer to the viewer at a lower vantage point, to draw the viewer in and making him really pay attention. The technique in his drawings is so compelling and his compositions so nicely set-up but still referencing the everyday life, the kitchen, the fruit and vegetables we daily use. This balance between art and reality.

I just realize that I am looking around at imagery that resembles what a food stylist would have set-up today for a photoshoot. And I wonder, how does paintings depicting food of the 18th and 19th century can be a source of inspiration today? And what information can we collect and re-invent from what seemed a random still-life set up for a painting? 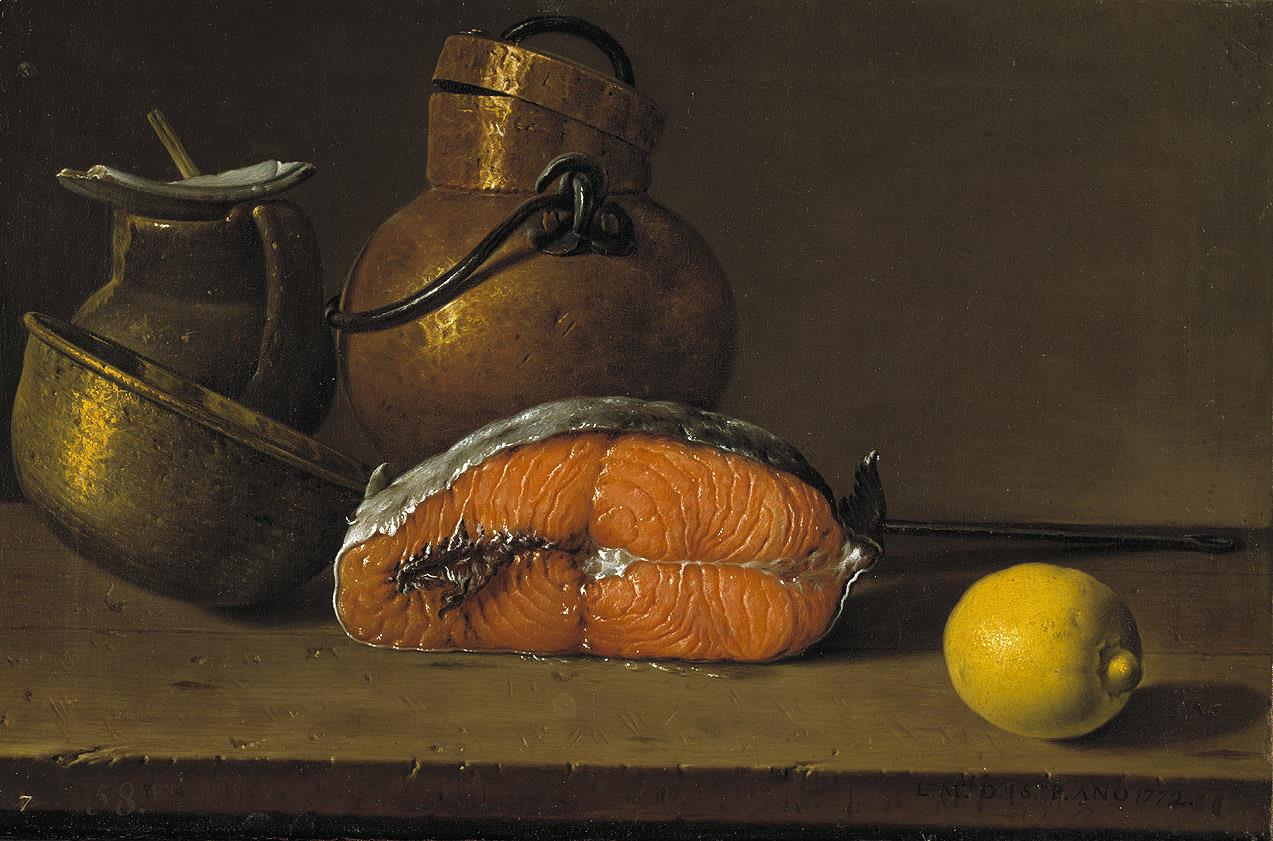 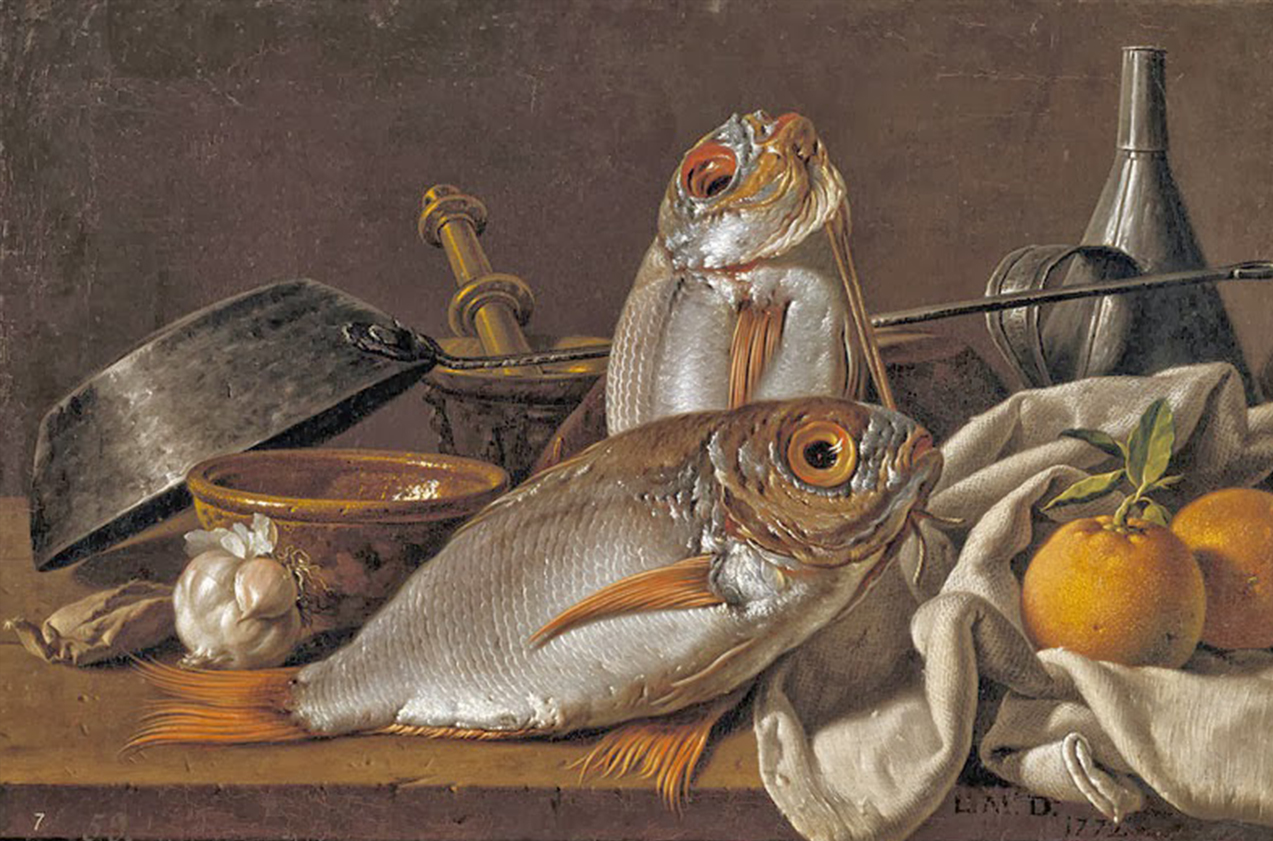 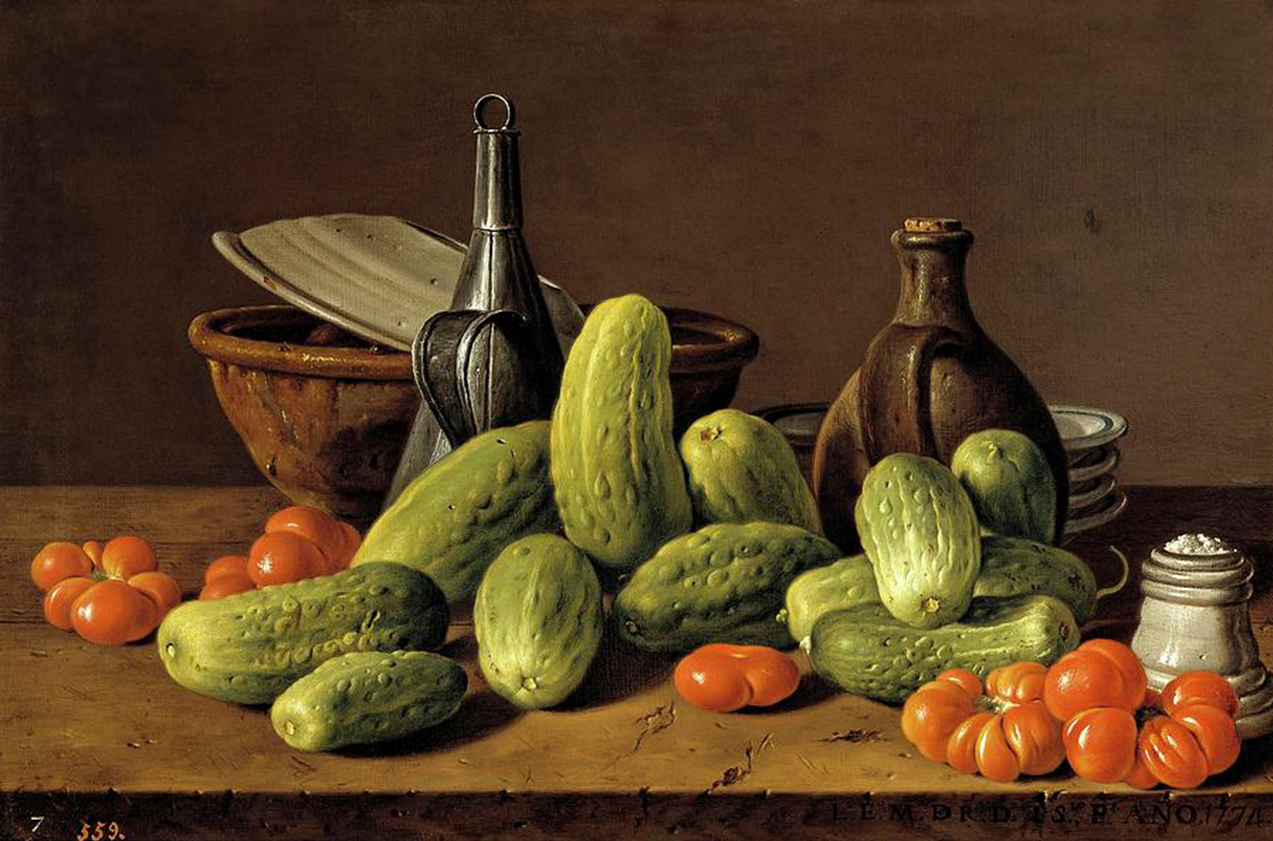 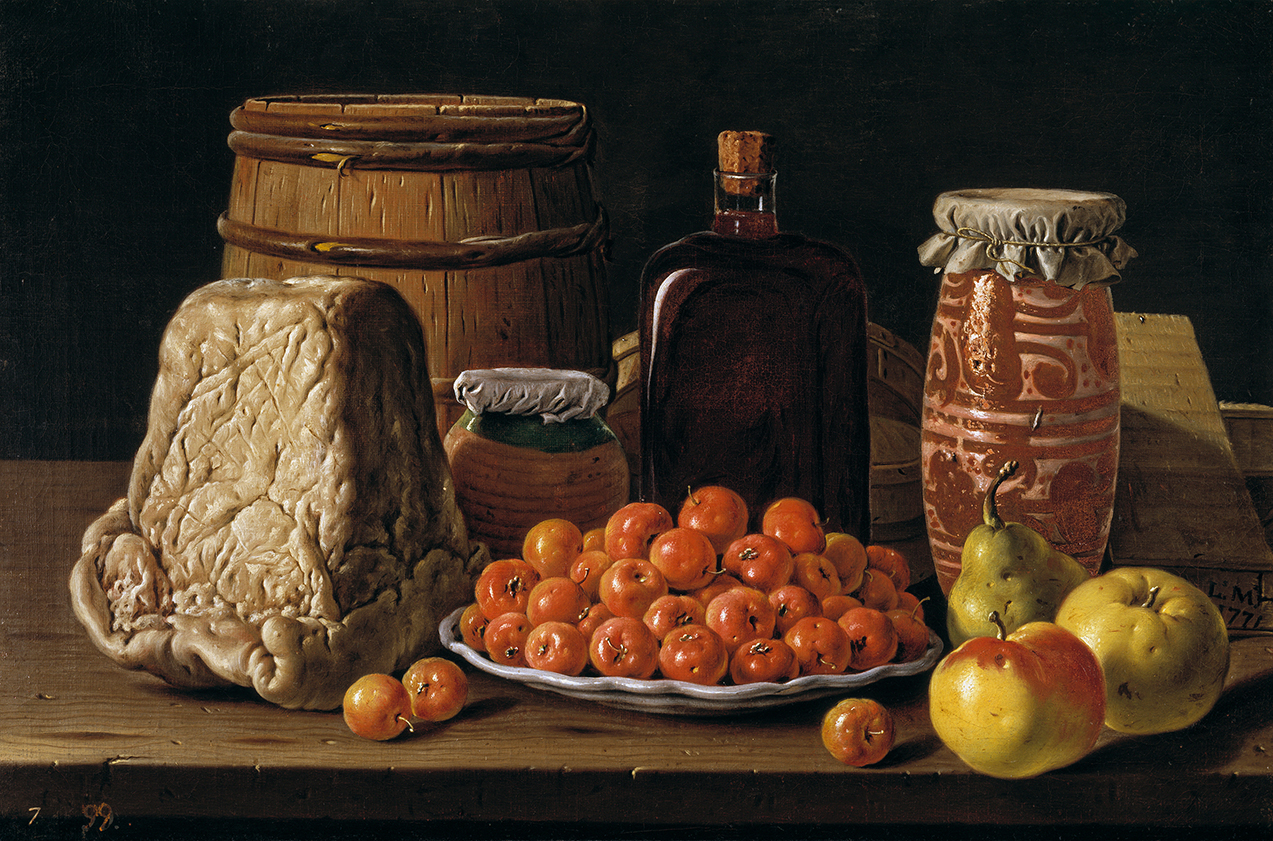 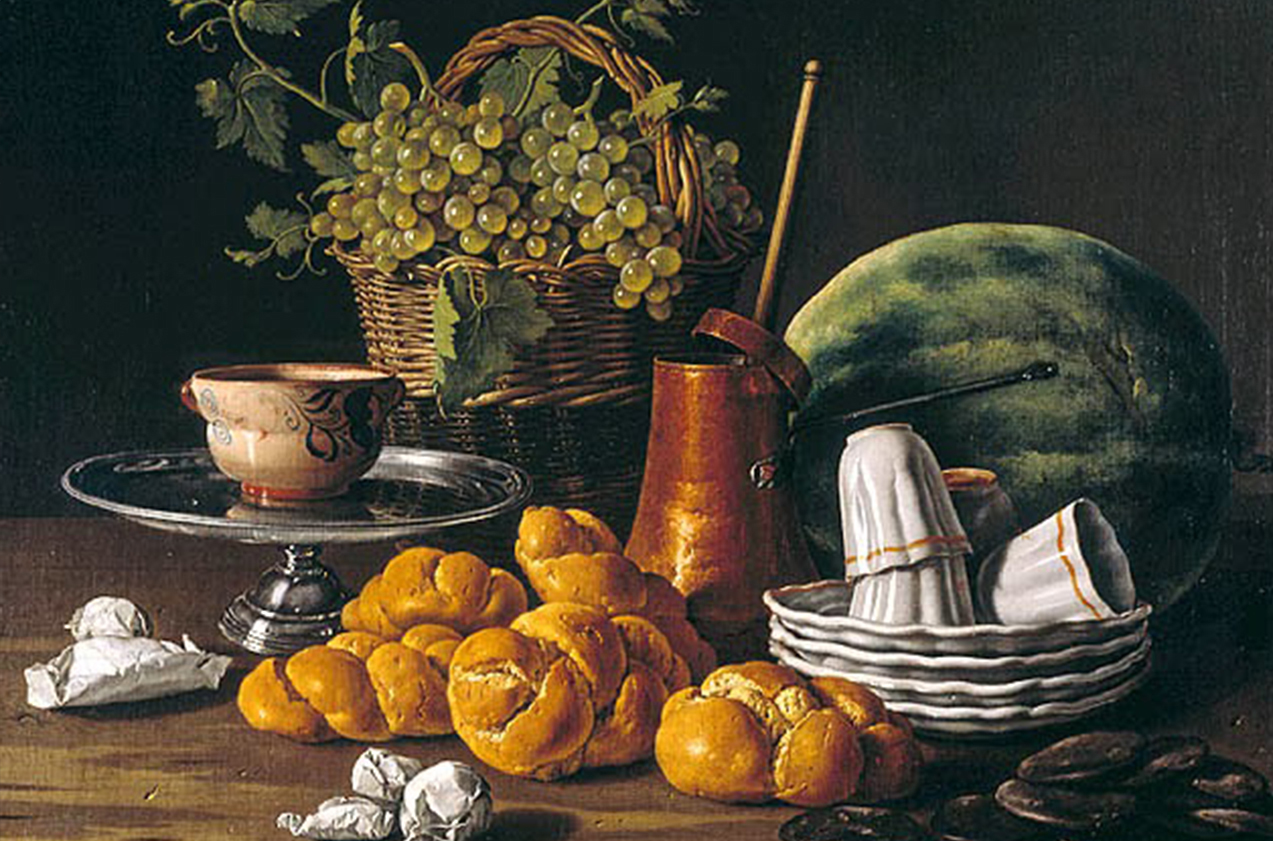 In reality the set-up is not random at all. The artist both consciously and unconsciously knows very well what and how his set-up should be. Who would imagine back then that setting up a composition of fruit and vegetables, copper spoons and pots would be today an actual paid profession. But in the other hand these paintings show how much artistry is needed for the content to be so powerful. Today it is depicted through photography but this on its own has so many stylistic differences and outlets. I know this discussion can be very long, I actually would love to do it as PHD research topic but lets just stay on the surface for now. Just an analysis of ideas and first impressions. I really would like to focus on the aspect of composition, the negative spaces created, the light and shadows, the combination of objects, the choice of raw fish, meat and fruit and vegetables.

You may not be able to see it in all these paintings but theories and techniques used today in food styling can be traced – which are all actually techniques used in painting since always. The idea of triangulation between the objects in the scenery, the Fibonacci theory, horizontal or vertical layers, and also color theories are some of the aspects we use when setting a scenery for a food related shoot but also in product set-up is also very common. These methods create the mood of the final image, the focal point and what you want the viewer to see first, but also decide the way you want to ‘sell’ your product, whether this is the painting/picture or the actual product depicted.

Being and architect and art lover, having seen many exhibitions and have been into drawing and sculpting has clearly formed my unconsciousness which now this is reflected in the work I do related to food styling and composition. However, I am very intrigued to see how I can actually be inspired and influenced more directly from these paintings and the art throughout the centuries. Obviously, this is a process that takes time but *note to self* I hope that this will be something I will get back to. After leaving the museum a few images came to mind of people I admire and create really unique work today and I see their work as pioneering. And I couldn’t help but start trying to decompose and understand their work based on the paintings I had just seen. 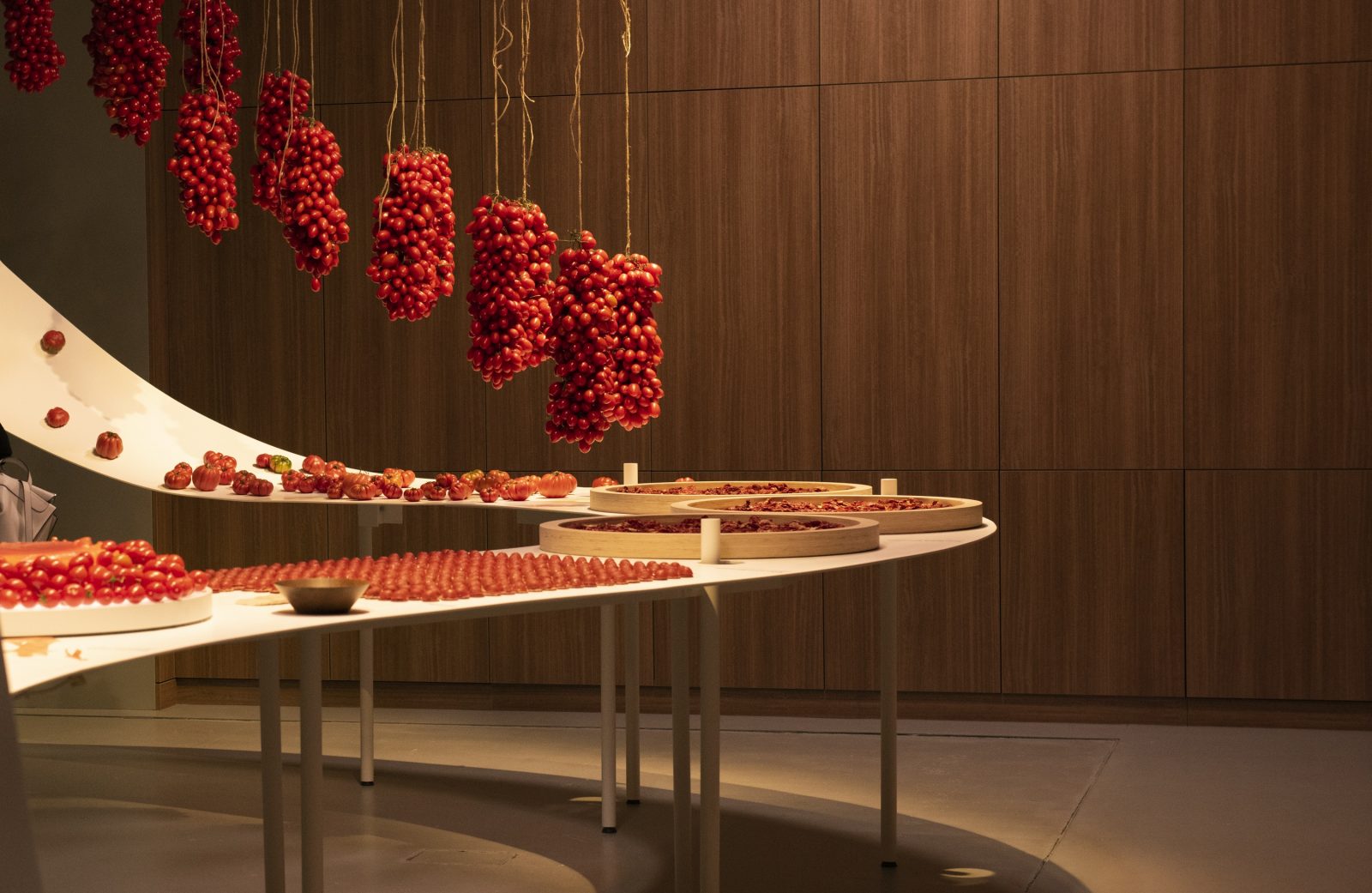 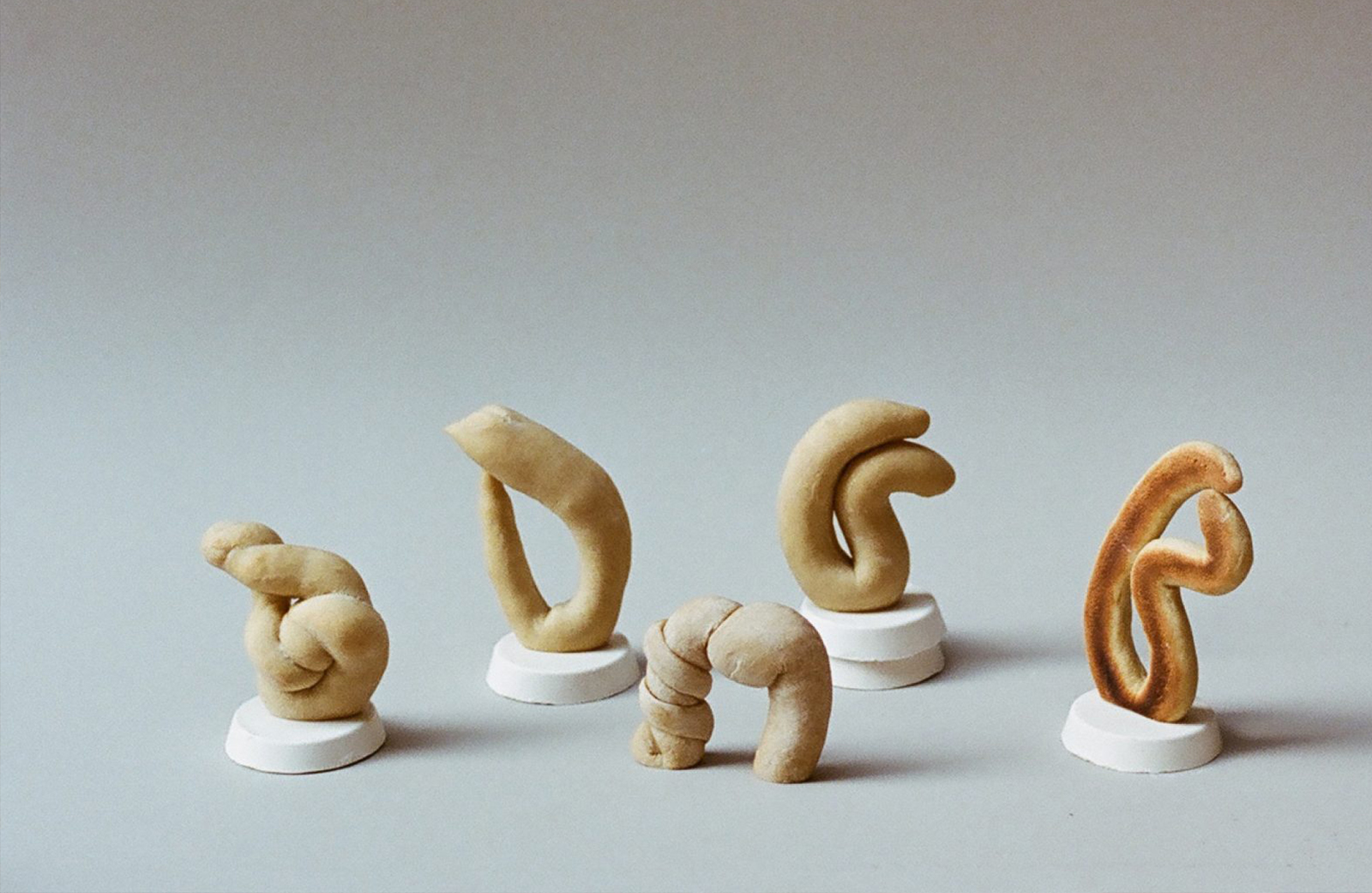 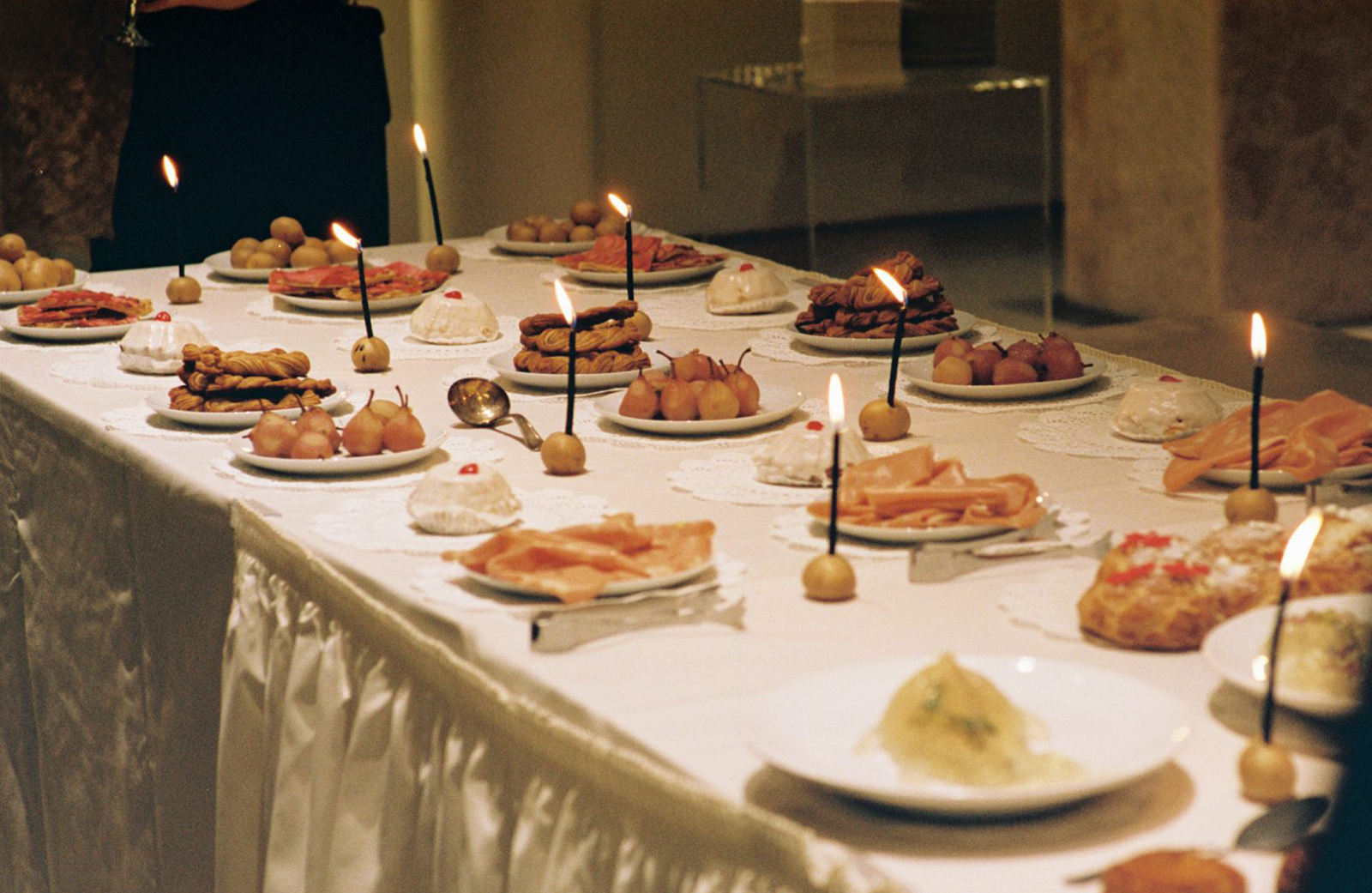 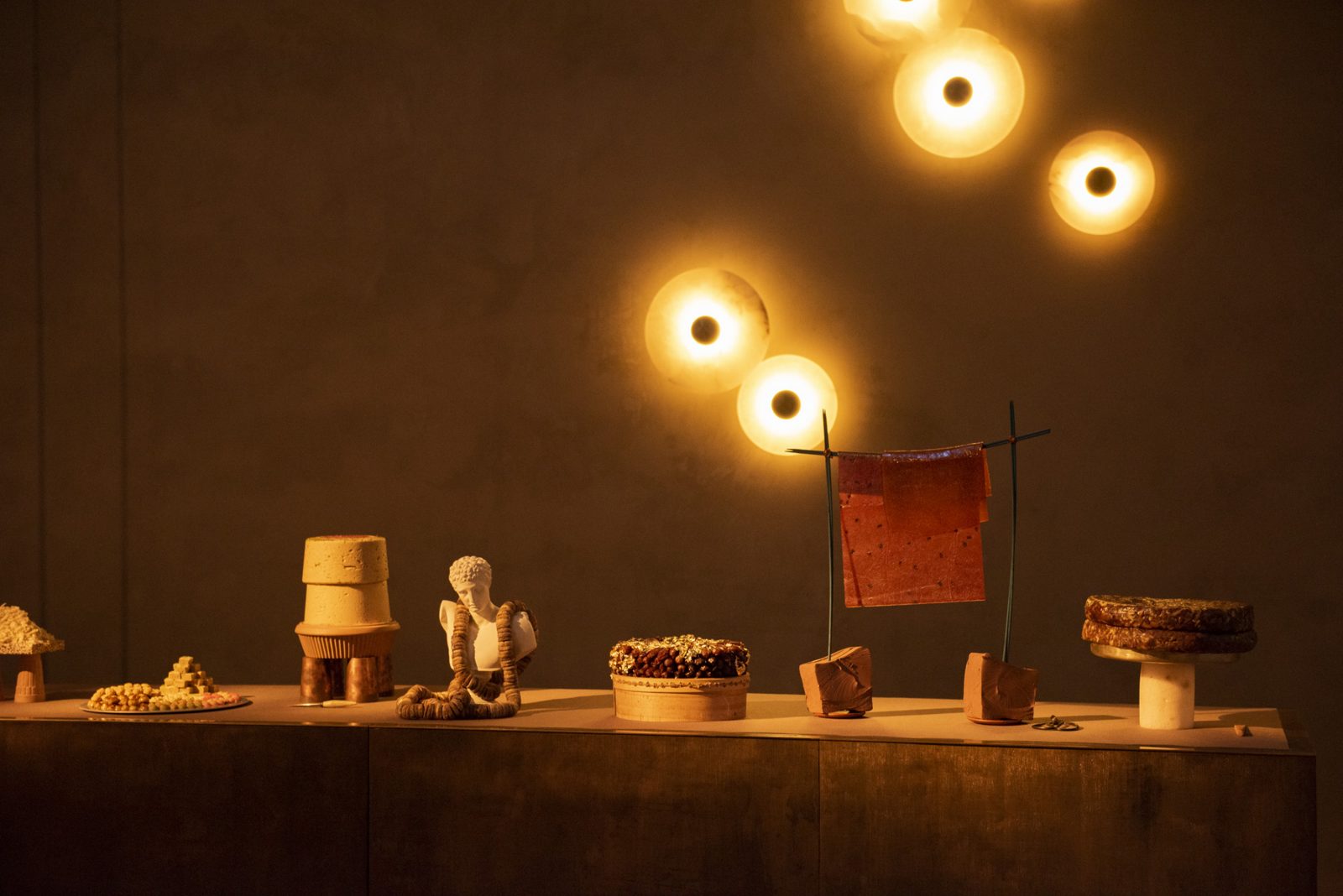 Laila Gohar (http://lailagohar.com/) is one of these people that absolutely fascinates me. She is the person you want to have as your friend, a brilliant mind, what you would call a pure artist. She designs food experiences and culinary installations. Everything she does is so visually fascinating and experimental, almost as a performative art piece that’s interactive. She is inspired from fashion, art, architecture, design and uses food as a medium to investigate human emotions and reactions. It is very close to the way I try to investigate and use architecture to re-create the same experience using food and inspire each other. She focuses a lot on the ingredient, material, food and the capabilities that this can give. The social aspect of food is also fundamental in her creations. The uncanny aspect of her creations is what draws me in. I could really talk on and on about her work but just take some time and google her and you will get exactly what I m talking about. Comparing to the paintings of Luis Egidio Melendez we see a complete reindentation of composition. More spaced out, mostly arranged for interaction but still photogenic. Let’s not forget we live in the age of imagery and the internet. But yes, she takes all aspects of arrangement, color, form and mixes them up and putting them back together creating her own style. This is actually the goal, finding your signature and distinct voice, respecting your references, history and background but not letting them become an obstacle in your creation. 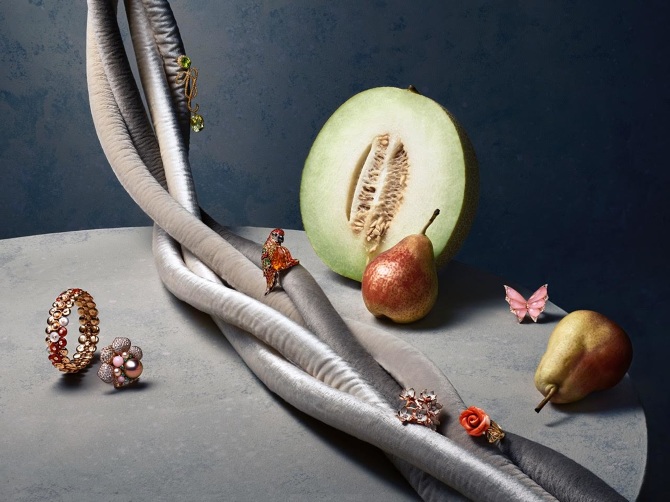 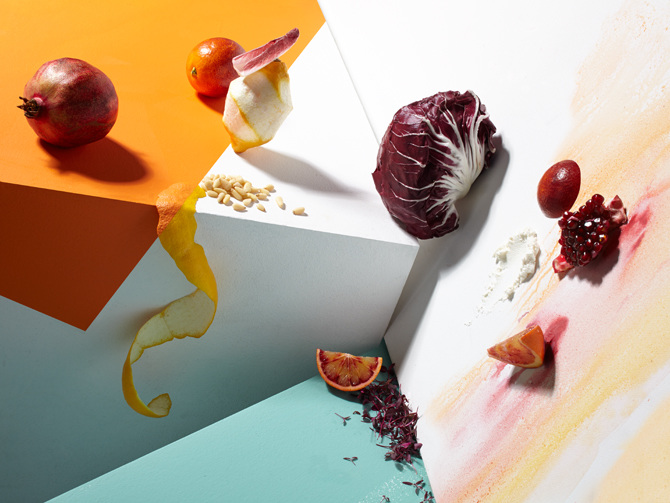 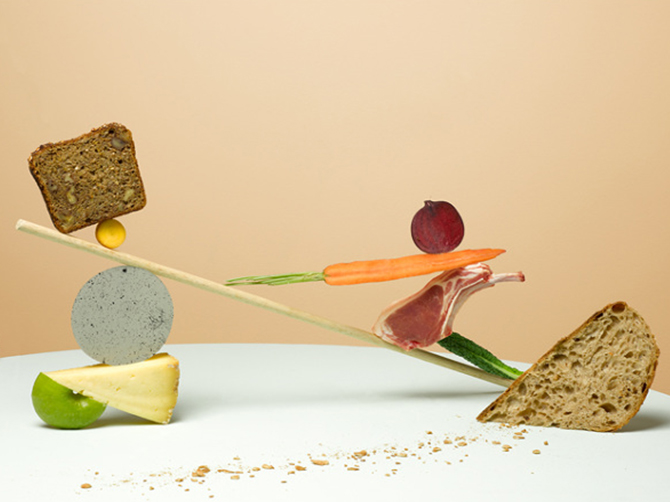 Aliki Kirmitsi (https://www.alikikirmitsi.com/) is a Cyprus born, London based art director and set-designer. She works a lot with contemporary and abstract still life creations. What really impresses me with her work is the way she deals with space. This organized chaos that is simultaneously so simple but intricate and surprising is what makes her work stand out. Her projects that incorporate food and raw ingredients are the ones which interest me the most. She plays a lot with changing the form and shape of each object. Cutting a watermelon in many pieces, all in different triangulations, or complementing and putting together seemingly un-matching objects. This gives a new life and purpose to the chosen objects. Also, where she positions the viewer is interesting. Unlike the paintings she places the viewer a bit higher, having a better overview of the scenery. The set up very often seems as if it is not put together on purpose, a mess that is randomly created. But this is what makes the imagery so strong. It adds movement, action, although things are still it seems as if they are doing something. Another different approach is that she often uses contradicting colors, contrasting, unlike Laila Gohar who most of the times achieves a continuity and integration of her whole concept to the color scheme she selects every time. 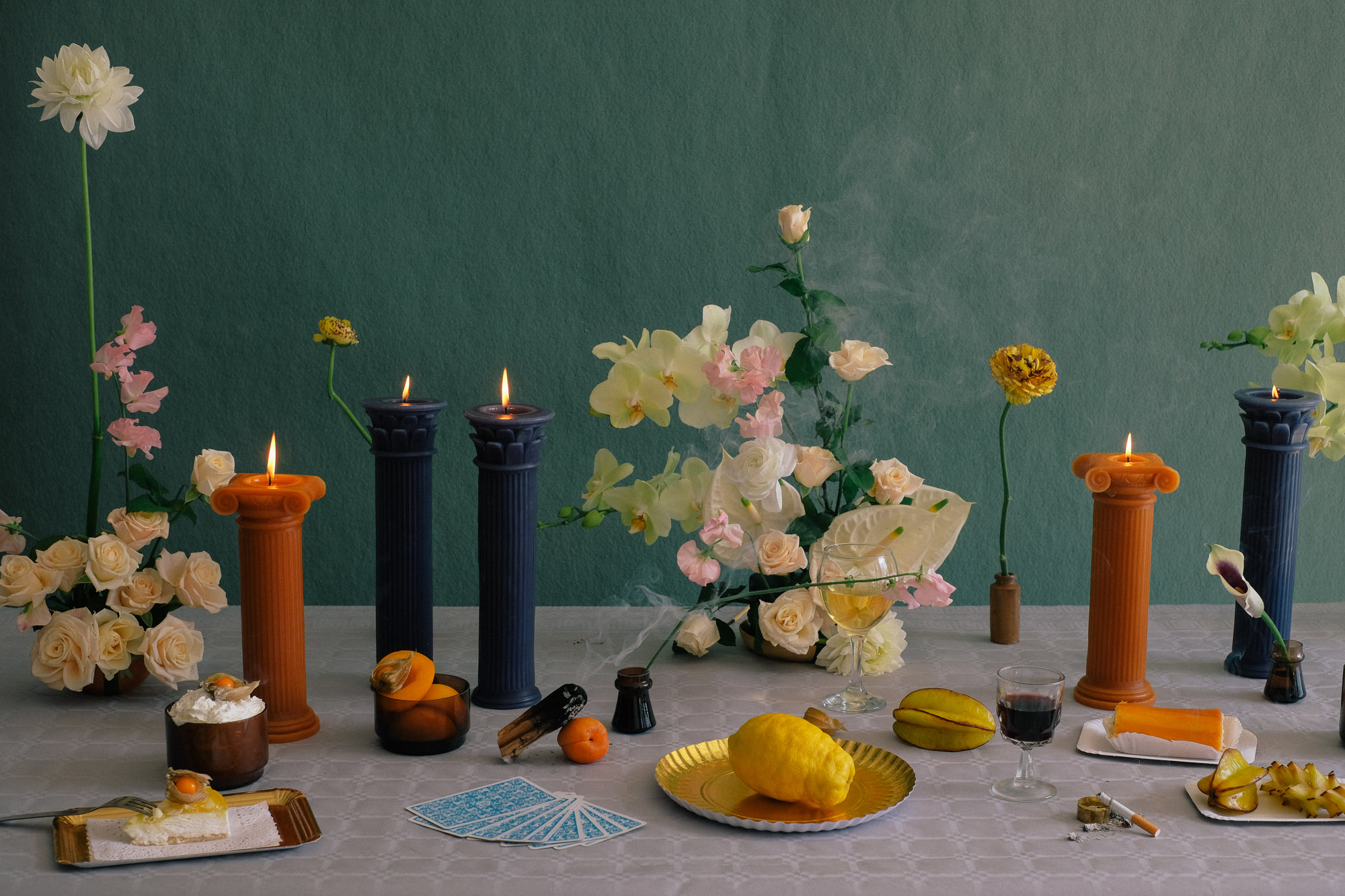 Carolina Spencer is a floral designer that values a lot nature, the story of each object and the energy every object transmits. She creates unique art compositions and installations always using flowers, as living objects. She creates this balance that is really exciting. I admire a lot the fact that she designs the vases and almost everything in the scene. In the chosen image above, she has created not one focal point, making your eye navigate around the image, mainly directed by the vertical elements, the colored candles. For the image above Carolina Spencer Explores The Ritual Of Sobremesa For DOIY.

For her design for DOIY she says "I chose the candles, the big ones. And then a crystal bottle. It’s like a still life, but different because we created a table. A kind of “sobremesa”. It’s a bit tacky or kitsch, but not too much. We bought some pastries and we even used wine and cigarettes. There are tarot cards as well! I wanted to do something not unusual, not too clean, playing with dimensions and different proportions. So a small glass with a tall flower, next to the oversized candles. What I like about the candles is that they are so big, really big, with a tiny flame. I wanted to experiment with imperfection, embracing the beauty of the dirt. This is something I like to experiment with while I work." 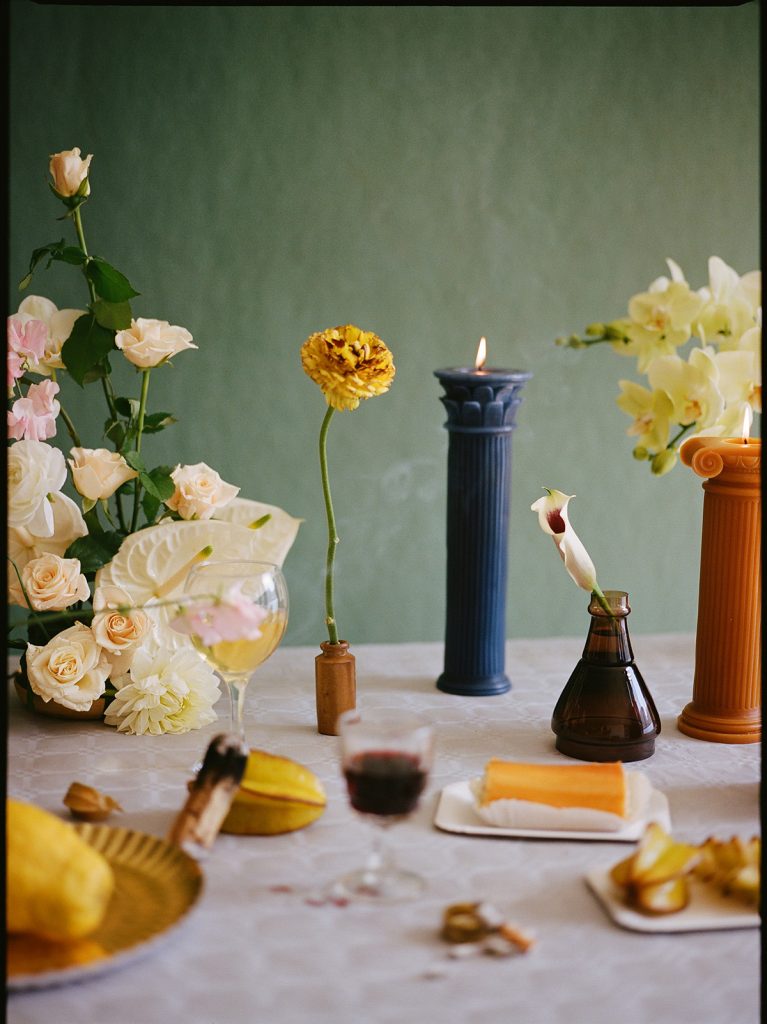 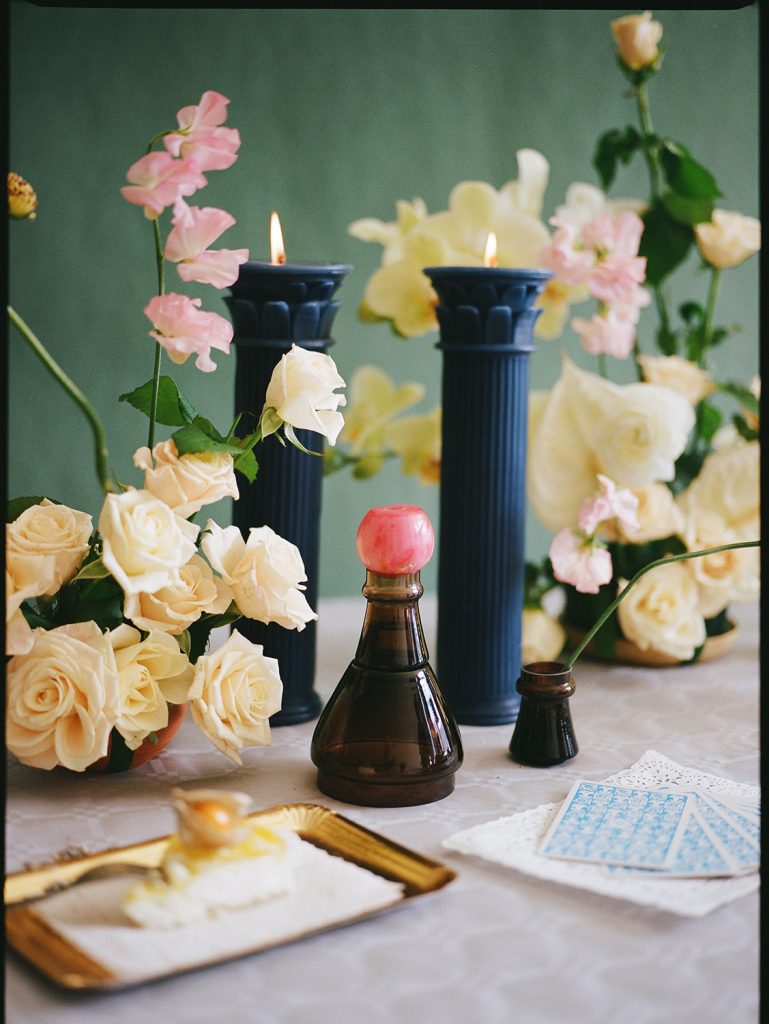 On a final note, and food for thought for a next post, a painting that attracte
d my attention and arose different feelings compared to the static paintings of Luis Melendez was Sandro Botticelli’s painting ‘Scenes from the story of Nastagio degli Onesti’, 1483. The image (top of the article) is the fourth panel of the story and it depicts the wedding banquet. What I noticed is a painting depicting a wedding, a set table, full with food. However, we are used seeing images of food always so serene and happy or static and erotic. The unpleasant and stressful feeling that this painting of Botticelli implies is something unusual. But still makes me think and see a different approach to how food can be presented. This more grotesque point of view, with the girl in front being torn apart by 2 dogs and the tables being turned over, food falling on the ground and people in panic running around has an interesting impact.

The different examples of designers and how they interpret their vision is such a source of inspiration. My aim to combine the story and history, using a contemporary lens, and always pay tribute to the emotion of the viewer and the elements of space.
Share
0 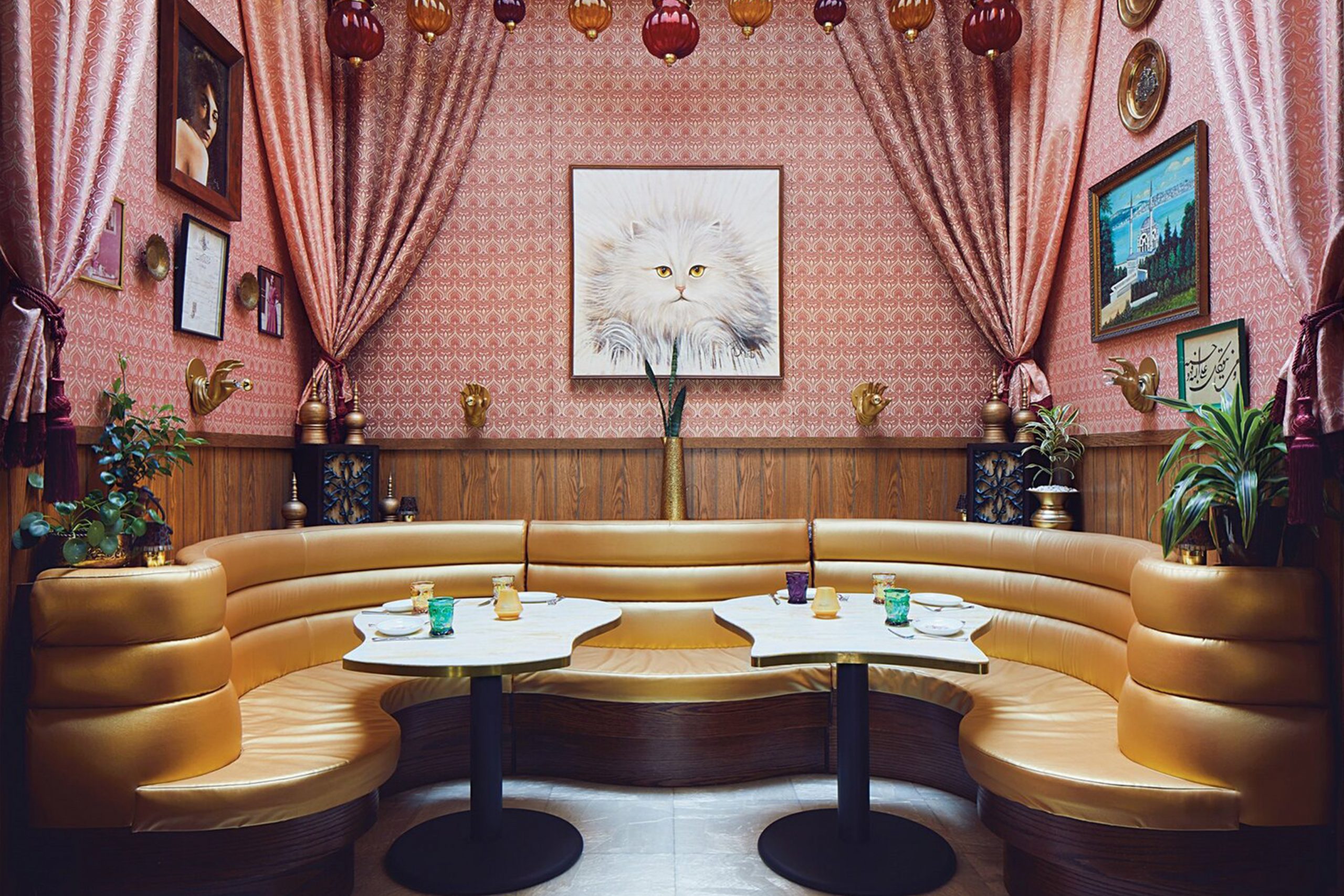 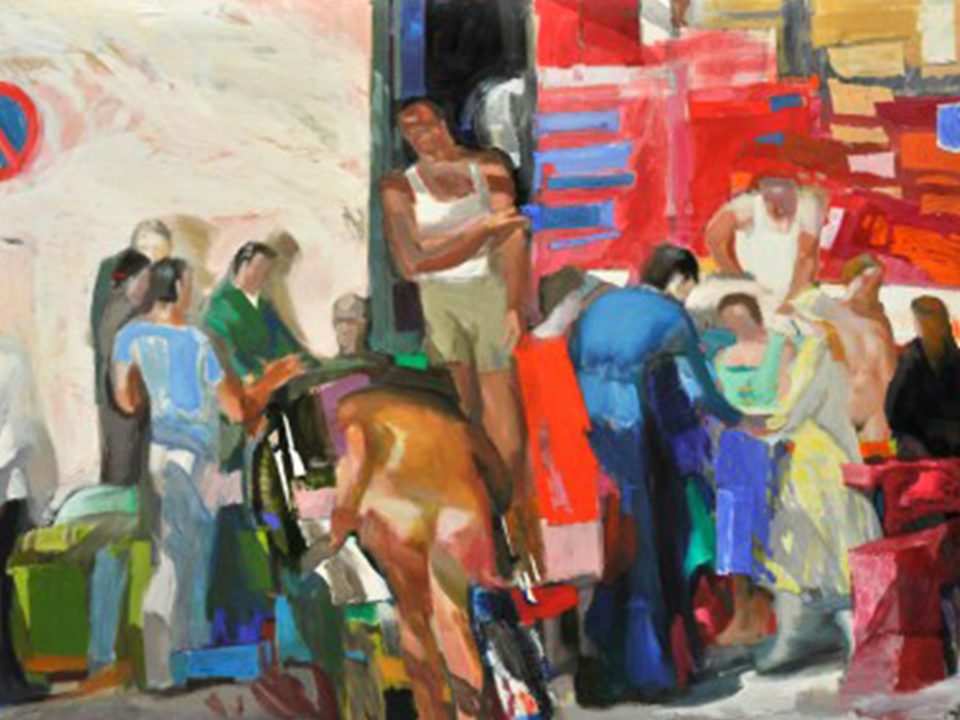 Athenian ‘Laiki Agora’- the city inside out / Panayiotis Tetsis 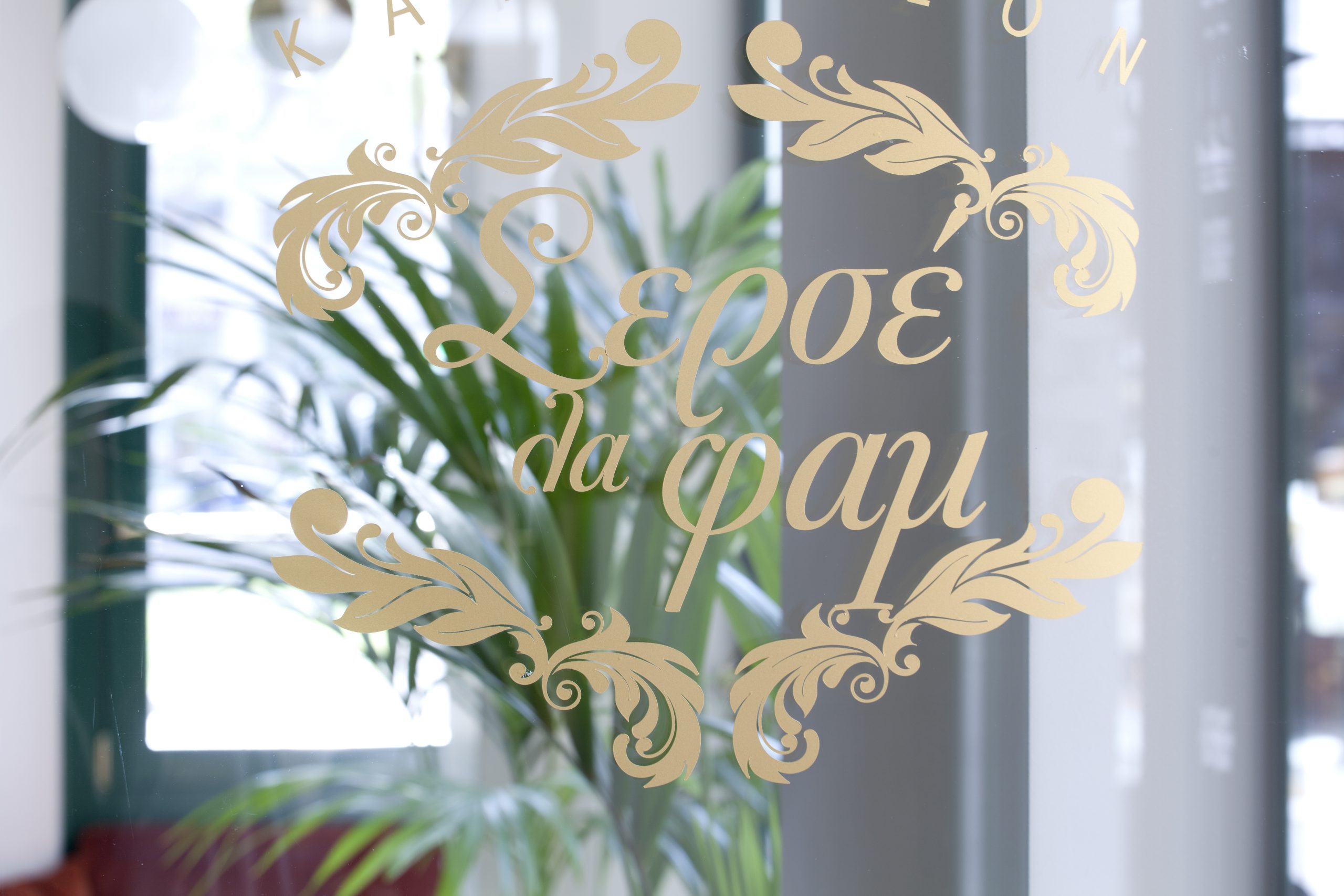